These days you find a lot of spread offense teams at all levels of football using an empty formation. Defensively, teams find themselves having to decide whether to apply pressure by blitzing the quarterback or play a more conservative style of defense with more zone and less blitzing.

The below package is a very aggressive blitz package, bringing pressure to the offensive backfield. In return for that pressure, the pass coverage behind the blitz is man to man... placing a lot of pressure on your secondary and linebacker (Sam backer in this situation).

Always remember, football... like certain aspects of life is a 'high risk, high reward' proposition. But, with high risk also comes the potential for harder falls! I always tell coaches who contact me that no one knows your team better then you do (or at least that's the way it's suppose to be). The way you attack an offense should be 80% decided on that factor... what can your team do or can't do physically and mentally. The other 20% is left for the below type stuff, the strategy part of it.

Lets take a look at the below empty set and an aggressive blitz call: 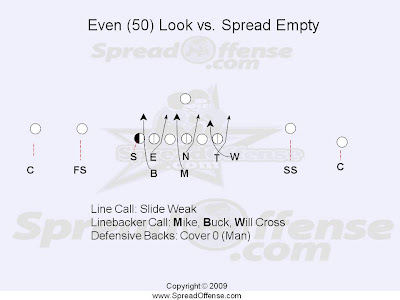 For reference, we call our three down-lineman:

Against the shot-gun empty 'trips/twins' formation above, the defensive line call is a:

'Slide Weak' call for the 3 down lineman, meaning they are aligning head up to their respective offensive lineman (no shade) and at the snap sliding weak (with penetration, the landmark is trying to place their left shoulder pad (in this case, going right) to the offensive lineman's gap arm pit, then re-directing up into the gap), which in this case is the twins side of the formation (the TE/twins or 'trips' side is the strength of the formation).

'Mike, Buck, Will Cross', a 'controlled' cross stunt/blitz from the three (MBW) linebackers, wanting to wait until the ball is snapped and their corresponding defensive lineman has crossed their face prior to them establishing forward momentum on the blitz (it usually is a 'thousand one' cadence, then blitz).

I use the word 'controlled' because based on the down and distance of the play at hand, this could either be a run blitz or a pass blitz, and the last thing you want to do is run by a run play because you blitzed 'out of control'.

This is a critical coaching point, especially at the young levels, being able to teach defensive players how to blitz 'under control' based on the down and distance and more importantly, the real time read of the play... pass or run.
A blitzer is useless if they run themselves past an inside run play (especially to their side) or a mobile quarterback on a pass.

The defensive backs and linebacker (Sam) pass coverage call is:

'Cover 0 - Man to Man', With the following responsibilities:

Corners: #1 Receivers (man to man) - slight outside shade, 5 yards off the receiver.

Free Safety/Strong Safety: #2 Receivers (man to man) - slight outside shade, 5 yards off the receiver. {I actually have the FS on the strong side of the formation covering #2 and the SS on the weak side covering #2, not a big deal... your call as a coach}.

Sam: Man to man versus the Tight End (Y), #3 receiver. Notice, Sam also has D gap responsibility versus the run, he must keep his outside arm free (maintain outside leverage) and not get hooked on a QB sweep. He also has to 'squeeze' any QB Down (kick out by Guard) play... don't spill it to the outside, funnel it inside by attacking the outside shoulder of the kick-out guard. That play (QB Down) should never materialize though, with all the pressure into the backfield through the strongside A-B-C gaps.

Corners and Safeties have to really watch the 'rub routes' and pick plays here...

Hopefully this package is something you can use in defending an empty set out of the spread offense.

Posted by Mark at SpreadOffense.com at 1:48 PM