Terrelle Pryor has been called the next Vince Young. He certainly looked the part Saturday at the U.S. Army All-American Bowl high school all-star game in San Antonio, Texas.

Pryor ran the spread offense for the East team with exceptional poise and execution, leading his team to a 33-23 win over a talented West team.

Pryor split playing time with two other quarterbacks, but ended with 155 all-purpose yards, 79 rushing and 76 passing and was named the games MVP.

The physically dominant quarterback out of Pennsylvania stands 6-foot-6 and 230 pounds.

He still has not announced a college choice for next season. He is reportedly considering Florida, Michigan, Penn State, Ohio State, West Virginia, and Oregon.

The national signing day is Feb. 6.
Posted by Mark at SpreadOffense.com at 6:30 PM No comments: 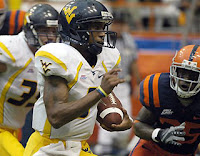 Just when you thought the wheels popped off the WVU Mountaineer spread offense after their crushing loss to PITT on December 1st, they unleashed a venomous attack on the Oklahoma Sooner's in the 2008 Fiesta Bowl 48-28.

West Virginia amassed 525 yards of total offense (349 on the ground) against a Sooner team that was allowing 91 yards of rushing a game.

Patrick White was responsible for 326 yards of total offense, and showed why he's one of the most explosive dual threat quarterback's in NCAA history.

A few articles ago we discussed how important a balanced attack was in the spread offense and pointed to WVU as one of those programs that may need to add more passing into their attack.

Well, the interim staff over in Morgantown did just that, as White connected on some timely passes the entire night which kept OU off-balanced.

Another impressive showing was by Noel Devine, the true freshmen back-up tailback at WVU who ran for 108 yards and 2 TD's (filling in for the injured Steve Slaton).

How cool is the atmosphere at the 2008 Capital One Bowl with Florida playing Michigan.

You have in the house down in Orlando Tim Tebow (this year's Heisman trophy winner and our player of the year), Coach Urban Meyer and Coach Dan Mullen from the Gators (two top Executives of the spread offense), Michigan throwing in a new spread offense wrinkle in Coach Carr's last game, and the Chairmen of the Board Rich Rodriguez at SpreadOffense.com on the sidelines as an observer (Michigan's new coach).

Wouldn't it be nice to grab this group after the game for some spread offense talk, a little clinic stuff for us spread fanatics!

Enjoy the bowl games - a lot of shot-gun spread offense is being displayed throughout the country.
Posted by Mark at SpreadOffense.com at 1:24 PM No comments:

How Important is a Balanced Attack In The Spread Offense?

When you think of the spread offense, what is the first thing that comes to mind? Is it running the ball using the zone read, triple option, and quarterback 'single wing' type plays like West Virginia and Oregon (with Dennis Dixon)? Is it throwing the ball all over the field both vertically and horizontally like Hawaii? OR...is it a balanced mix of rushing the football and passing the football like Florida?

Maybe the reason I think of the spread in this rushing form is because it is the newest, freshest, or the 'buzz' out there in college and high school - not necessarily the 'best' form or style.

I mean don't get me wrong, when Oregon, Appalachian State or West Virginia had teams scrambling to figure out how to defend their respective rushing dominant spread offenses, it was some of the funniest stuff to watch as both a fan and a coach. It was so good that you wondered 'how the heck are they doing that?'... gashing some pretty good defenses with these shot-gun spread running plays?

On the flip side, if you tuned into West Virginia's two defeats this year versus South Florida (who has beaten WVU two years in a row with great defense) and Pittsburgh, you would have shook your head saying "What's all the fuss about?"

As a former offensive coordinator myself, I must admit that one of the hardest things to do is get away from something that is so successful so often. Is it pride, ego, stubbornness, or the fear of not enough preparation or more importantly game exposure to 'Plan B' that prevents coaches from shifting gears when a defense hasn't stopped you all day?

Remember, there is only so much time in a day and more importantly so much 'game experience' for alternative measures to be confidently ran when the scoreboard is on.

So as a coach...what do you do? Your racking up tons of yardage and points using a lot of the same stuff simply because the defense can't stop you, do you stop calling what's working (going against the 'If it ain't broke, don't fix it' motto) and try to 'balance' your attack? Risking a possible turnover or more importantly loss of offensive momentum and scoring to prepare for the future (just in case)?

Obviously the capabilities of your player's will have a lot of determination on how balanced you are willing to be.

It's a fact that Patrick White from WVU couldn't run Colt Brennan's offense at Hawaii (or vice versa) but how 'balanced' could these two guys really be?

If you looked at these two stats from two great college QB's, you would say that West Virginia is the more 'balanced' offensive team, but is either team really 'balanced'?

Then you have the Heisman trophy winner Tim Tebow from Florida, his stats so far this year look like this:

Not very balanced stats, but during my observation of this year, I would have to say that Urban Meyer and Dan Mullen of Florida do the best job of 'balancing' an attack and more importantly staying with that balanced attack game plan then any other spread offense in the nation.*

Is it because of Tim Tebow's skills? or a philosophy the Gator's have that staying balanced in the spread is the right formula to keep defenses honest and stressed?

The Gators did lose 3 games this year in the very tough SEC conference.


* (As a side note, Butch Jones from Central Michigan also did a great job of balancing his attack in the Motor City Bowl this year.)
Posted by Mark at SpreadOffense.com at 5:13 PM 1 comment: