Hey folks! Just in case you hadn't seen this game last month, here's a video below of the spread offense fest between Michigan and Illinois. The game went into triple overtime, with Michigan finally prevailing 67-65.

Denard and QB Sweep Pass Out Of The Spread Offense

Hey Folks! As I've been watching film of the Michigan spread offense from this year to date, there is one specific play and/or scheme that Coach Rod and Coach McGee have been calling and the players executing that makes me go 'Wow'!

Now we all know the threat that Denard Robinson brings with his legs at the dual threat quarterback position, and one play that has been working extremely well is the QB Sweep out of trips formation.

Basically this QB run play is a 'hat on hat' play where the superback (or half-back in the shot gun alongside the QB) will lead the QB on a sweep play with the rest of the offensive players executing 'on' blocks, especially on the perimeter. The interior linemen are executing outside zone and reach blocks on this play, trying to work to the outside of the 'V' of the neck of the defensive linemen and working to drive the opponent off the line of scrimmage while working to the second level linebackers once movement occurs.

Here's a video showing the play I mention above, with the trips being created on this play by a tight end (TE) and two flankers (FL). You'll notice on this play the play-side offensive tackle (OT) executes a nice fold block to get to the perimeter backer with the TE blocking down.


Now that we've seen a visual of the run play, lets look below at a very hard to defend counter to that play, a QB Sweep Pass.

Lets take a look at this in a static play diagram below. 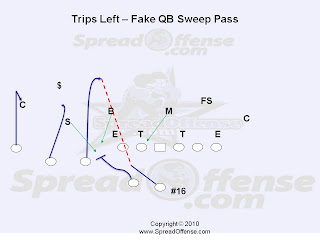 OK, now put yourself in Notre Dame's defenses shoes on this play - you have the best dual threat quarterback in the nation coming at the perimeter of your defense with his lead back ahead of him, you're thinking QB Sweep right?

Wrong! Denard pulls up and flips an easy touchdown pass to his #3 receiver out of the trips formation. Notice in the video how the Notre Dame's linebackers Sam, Buck, and Mike come flying up to defend the QB run, leaving the defense one defender short in covering the pass to the trips formation.

This highlights the pressure a dual threat QB can place on a defense.

Michigan Spread Offense - Every Snap vs Bowling Green in 2010

Hey Folks! How does a spread offense video sound to you that shows 82 offensive snaps, 721 total yards of offense, 31 first downs, and 9 touchdowns?

Get Your Spread Offense Playbook - Offense and Defense
Posted by Mark at SpreadOffense.com at 1:26 PM No comments:

Hey Folks! In case you didn't see the game, here's every offensive snap of Denard Robinson and the University of Michigan spread offense versus Notre Dame last weekend.

Robinson, a dynamic dual threat quarterback in Rich Rodriguez's spread offense contributed 502 yards of total offense, with 258 on the ground and 244 yards passing.

Being a coach, I have to give a lot of Robinson's early season credit to the Michigan offensive line and the perimeter blocking by the wide receivers.

Coach Rich Rodriguez's spread offense was very effective, especially highlighting dual threat quarterback Denard Robinson. I really like what they did with the quarterback isolation play (QB ISO) in this game, spreading the field out and then using the numerical advantage in the box to run Robinson, an athletic QB with the Ace (or superback) leading through the hole.

Robinson's throwing was probably the most impressive, he showed great accuracy, great decision making, and had nice zip on the ball.

Here is a nice video clip segment of all the Michigan offensive plays in the game.