The below diagram shows a "50 front" odd defense against a classic spread offense look, twins/open or 'split' - two back - shot gun set. 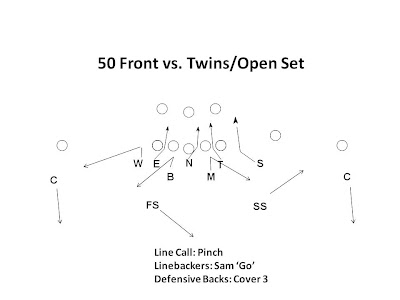 For reference, we call our three down-lineman:

Against the shot-gun 'Twins/Open' formation above, the defensive line call is a:

'Pinch' call for the 3 down lineman, meaning they are aligning head up to their respective offensive lineman (no shade) and at the snap sliding hard (with penetration) to the closest inside gap, with the Nose Guard (N) always sliding to strength on a pinch call, and weak on a veer call. A 'Veer' call is the opposite of a 'Pinch' call, the alignment is the same (head up), but the defensive linemen would slide hard to the nearest outside gap to them.

'Sam Go', a 'controlled' blitz from the strongside linebacker, wanting to try and time the snap so he has forward momentum. I use the word 'controlled' because based on the down and distance of the play at hand, this could either be a run blitz or a pass blitz, and the last thing you want to do is run by a run play because you blitzed 'out of control'.

This is a critical coaching point, especially at the young levels, being able to teach defensive players how to blitz 'under control' based on the down and distance and more importantly, the real time read of the play... pass or run.

A blitzer is useless if they run themselves past an inside run play (especially to their side) or a mobile quarterback on a pass.

I always teach linebackers to be run defenders first, they have to have 'forward moving' run stop mentalities, then once pass is properly identified, they need to hustle to their pass responsibilities if they're not blitzing.

The defensive backs and linebacker pass coverage call is:

'Cover 3', With the following responsibilities:

Will: Flat (Must stay with the running back on a wheel route/out and up)

Important coaches point: the weakside Corner and Will are likely going to be converting to man as the play progresses, but at the snap the Corner wants to show Cover 3, aligning 8-10 yards off the SE as this allows for better run support, as opposed to a backside man lock on the SE.

Hopefully this package is something you can use in defending the spread offense.

Posted by Mark at SpreadOffense.com at 3:13 PM