USF Has Advice To Offer - The Spread Offense 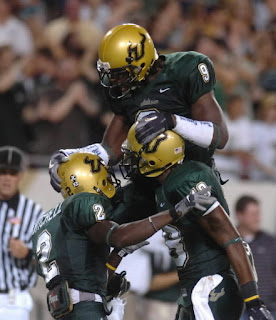 By BRETT McMURPHY, The Tampa Tribune

TAMPA - With Rich Rodriguez now at Michigan, the University of South Florida has suddenly become a hot spot for teams seeking help in preparing for Rodriguez's spread offense.

"Johnson said it was because we've done such a good job against that offense," Burnham said. "And we've had some success."

"They pick our brain and see why we do certain things," Burnham said. "We've done as good a job slowing them down as anybody. With the spread offense, I guess people think we have some answers."

Burnham said he'll only help out so much. "There are a few subtle things I keep to myself," he said. "We don't give away all our secrets."

Posted by Mark at SpreadOffense.com at 8:08 AM No comments: