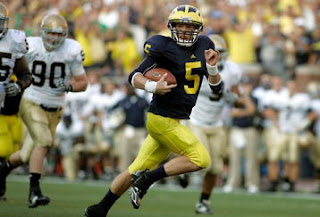 I remember Bill Parcells unleashing one of his many classic coaching comments after a great performance by Tony Romo back in 2006... 'Lets not enshrine him in Canton or the Ring of Honor just yet fella's... OK!" in his classic south Bergen County NJ accent.

Well on Saturday afternoon in Ann Arbor, Michigan it was hard not to start thinking about a great future ahead for Tate Forcier and the Michigan Wolverines.

Matt Millen was surely impressed, doing the game in the booth for ABC who has seen his share of talented football players as a player and NFL executive.

I got the feeling I was watching a little of Joe Montana, Steve Young, and Colt McCoy mixed into one very confident college quarterback, a true freshmen quarterback at that...

His decision making was excellent in the spread offense devised by Rich Rodriguez, aka Rich Rod or Coach Rod.

Is he a physical specimen? No.. but neither was Montana, Tarkenton, or nor is McCoy and Romo.

Forcier just seems to have that 'it' factor... you know, those intangibles that are hard to measure, but result in positive plays and an uncanny knack for raising the rest of the teams ability and intensity.

As for Coach Rod, I'm very happy for him. First off if it wasn't for him, I wouldn't be running this 'spread offense' online franchise and the likes of Urban Meyer, Butch Jones, Herb Hand, and many others likely wouldn't be coaching at such a high level either.

Isn't the spread offense fun when fun players execute it?!

--Mark
Posted by Mark at SpreadOffense.com at 11:06 AM No comments: