The Spread Offense In Youth Football 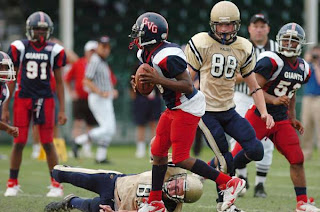 There are many youth football coaches that will shy away from the spread offense. The main reason why is the snap. Coaches tend to be scared of fumbled and/or mishandled snaps. When coaches hear the word “spread” they think passing offense.

There is a lot more to the spread offense than just 4-5 wide. The “myth” that shotgun snaps are fumbled often is completely wrong. I do not agree with the “myth” that the spread offense is a passing offense only and that it cannot be used in youth football. I have been coaching youth football for ten seasons, seven of which I have been coordinating the offense.
Here are my statistics of fumbles out of my shotgun vs. under-center series:
* Since 2007 I have had roughly (give or take) 400 shotgun snaps, QB mishandled nine, lost one
* I had over 300 snaps under center since the 2007 and had ten fumbles, four lost
I lost twice as many fumbles in my under center series than my shotgun series. With efficient practice reps there will be no snapping issues. What I like about the spread is that the quarterback can see the field and the defense much easier. Say the defense is showing blitz, quarterbacks tend to pull out early from under center and fumble, because they are anxious about the blitzing defense. The shotgun not only gives the quarterback time to see the field, but it also makes him a threat to run the ball.

Spreading the defense out will create some key advantages:
● Make the defense defend the whole field
● Make them defend multi threats (5-6 threats in each play)
● The wide splits create natural running lanes and easy blocking angles inside (base blocking is useless in youth football).
● Great blocking angles out on the flanks
● Isolate “stud” defensive players
● Makes defenders tackling in space (extremely difficult)
● Easy read of the defense, allows a real good look where you out man or flank the defense. This will allow you to call a play where you have the advantage
● Spread them out!! When you spread the defense out and use a motion it will freeze the defense, allowing you to only have to block three-four defenders to gain yardage

Using motion is a great way to get the ball carrier the ball in full stride, while working the edge of the defense. Make the defenders tackle in the open field. You can also use the motion to deceive the defense.
This is a no huddle friendly offense; let the defense dictate how we will attack and beat them. If the defense wants to load the box, here comes bubble screen, sweep or play action pass. Say the defense wants to spread out with our offense and gives us a “soft box” then we hit them with; draw, trap and power all day.

The screen game is really underrated, bubble, smoke/tunnel, and pull screens are killers. I do not have to tell coaches how hard it is to get their players tackling well in space. You need to work three to four centers snapping from day one for depth. Yes it does take time and reps but once they get comfortable with it, the spread offense will be a complete nightmare for coaches to stop.
Our philosophy is the spread offense at the youth level is a run first offense, the run sets up the pass.

Posted by Mark at SpreadOffense.com at 1:32 PM

Coach Nice blog, I have been following youthfootballonline.com for the past few weeks, youth football online suggested this site to me bc of my love of the spread...your site is great with a balance of contetn and vidoe.
-Coach Mike

Hey Coach. Ran the Spread with Youth in Mitey Mite Pop Warner (8-9 Year Olds the past Fall. Avg. 30 pts per game. Adding Triple Option out of the Gun this Fall. Here is a link to some of our highlights.http://www.youtube.com/watch?v=AedOvoidKto

Hey you guys where pretty good. We also ran the spread this year at 8 and under unlimited and had great sucess with it. We went 12-0 this year winning the PG County Championship and the first ever Metro bowl Championship which is the AAU (DC,MD,VA) Champs Vs PG county Champs (We are these guys). Check out the video when you get a chance. Here is the link.