Dolphins WildCat Offense Should Get More Interesting After A Bye Week

The Miami Dolphins will be fun team to watch the rest of the season if you enjoy the single-wing/wildcat formation. Coming off a bye week and an exciting victory two weeks ago against the New York Jets, I'm sure the Dolphins coaching staff has been adding to the creativity of the wildcat sets.

One area that has been expanded/improved on already is running the formation out of a more 'balanced' look, as opposed to the traditional unbalanced wildcat in the "1.0" version.

I actually wrote about a predicted 'WildCat 2.0' from the Dolphins back in June based on the success and failures of the '1.0' version created by Gus Malzahn, now at the University of Auburn.

My next prediction is that the final piece of the puzzle for Miami, Pat White will get more and more snaps as another dual threat change of pace.

Below is a grouping of all of the WildCat plays the Dolphins ran against the Jets, enjoy!

Defining The Sprint Out Pass In Football

If run correctly, the Sprint Out is an effective and essential weapon in a high school offense. Unfortunately, it is usually run incorrectly. Perhaps this is because coaches don’t see it run in the NFL and rarely see it in major college football. *However, the reasons you don’t see it run in the NFL are the very reasons it is so effective in high school football. You, as a quarterback, can learn how the sprint out should be run, and in turn, make it more dangerous as an offensive weapon for your team.

Let’s examine the reasons you don’t see the sprint out run in the NFL:

1) It utilizes the quarterback as a running threat.

* When run correctly, the quarterback attacks the corner with the option to run or pass; if you were paying a pocket style quarterback $4-$20 million, you wouldn’t want to leave him alone on the perimeter where a strong safety or outside backer can lay him out.

* NFL quarterbacks are rarely good runners or comfortable carrying the football in space.

2) In the NFL, the hash marks are the width of the goal posts.**

3) The defenses in the NFL are much more sophisticated than high school.

* In the NFL, they run more man-to-man, combo, and zone blitzes; I don’t mean to imply you can’t run the sprint out against a man-to-man defense, you can, but in this case, the quarterback will be running most of the time.

As I stated before, these are the very reasons it can be extremely effective in high school football:

1) It utilizes the quarterback as a running threat

With the quarterback attacking the corner, it forces the defense to commit to either the run or the pass with a split-second decision; if the defense covers the receivers, they can’t stop the run; if they commit to the quarterback, they must come out of coverage. Normally, even if the QB is in a one-on-one situation against a defensive player, chances are he will gain positive yardage.

* Usually, a high school quarterback is a good runner or comfortable carrying the football in space.

2) In high school football, the hash marks divide the field into thirds

In high school, a sprint out pass to the wide side of the field still leaves roughly ½ the field as a threat; the receivers have more room to get open, and the quarterback has more field to elude the defense if he chooses to run.

With a sprint out, you flood the zone with the receivers and compile the defensive troubles with the quarterback’s threat to run.

Now, you might be asking, “How is the sprint out run incorrectly?” By examining how it is run incorrectly, we can see how it should be run in order to be most effective.

The most common mistakes when running the sprint out:

By definition, the sprint out requires the quarterback to SPRINT. The QB should be sprinting to a specific point (about ten yards laterally and seven yards deep) before turning and attacking the corner. With few exceptions (an extremely talented QB against specific defenses with a designated “hot” receiver), the quarterback should not even look at the defense or the receivers until he makes the turn at that point. Often, what you see is more of a roll out in which the QB either drops too deep or runs too slowly; this minimizes the immediate threat to the defense, allowing them time to adjust and pursue, and reduces the running threat the QB should pose.

2) Not attacking the corner

In order for the QB to be a true and immediate threat to run, he must attack the line of scrimmage, thereby forcing the defense to make a decision. This is what the whole play is predicated on: making the defense commit!

The quarterback must be trained to throw the ball to the spot his receiver is going to be open (aka: anticipate the route and throw), whether or not the receiver is looking at him when the pass is released. This ability is deadly to a defense; failure to do so allows the defense time to react to the pattern. This requires precision, timing, and familiarity with the receivers which is only accomplished through practice and repetition.

The receivers, as well, must be trained to look for the ball in the air, to be ready to catch the ball as soon as they make their breaks.

No one said football was going to be easy. The throw on-the-run is a skill that has to be developed through much practice and repetition.

While running, the passer must twist his torso perpendicular to the target in a quick, cocking motion. Many passers do not get their shoulders far enough around – while still running – especially when sprinting out in the opposite direction of their passing arm.

For every action, there is an equal and opposite reaction. The throwing motion and subsequent release must immediately follow the cocking motion. This uses the momentum of the motion to assist the throw, like loading and releasing a spring. Many times QBs hesitate, creating two distinct motions, back and forth, which depletes the momentum and causes the pass to sail or flutter.

When running in the same direction of the receiver, the passer does not have to “lead” the receiver. A lot of quarterbacks don’t realize this. It’s simple physics. The ball is already traveling that way when it’s released, so it naturally “leads” the receiver.


The Sprint Out Drill 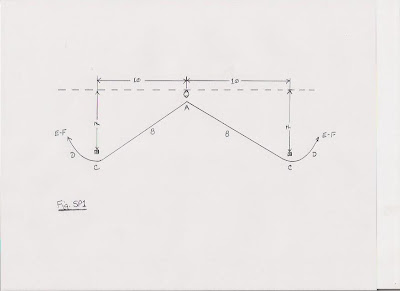 Set up the cones as shown in the diagram above. The quarterback should practice the sprint out portion of the drill to the point where he can do it by 'feel' (Kinesthetic Awareness) before receivers are added. As always, the proper stance, represented by the “X”, is the beginning of the drill (refer to the stance section). Use the cadence you will use to start each repetition. The explanation is for a sprint out to the right, simply reverse the drill when running to the left.

Here's a video below of Tate Forcier from the University of Michigan executing a sprint out pass out of the spread offense.


Pivot (A)
Pushing off with the ball of the left cleat, open the hips to the right wide enough to allow an immediate sprint toward the cone.

Sprint (B)
Sprint! Put the head down and sprint directly at the cone, keeping the ball chest high. At this point your job is to GET TO THAT CONE NOW!

Turn (C)
When you get to the cone, lift your head and make the turn toward the line of scrimmage; this is when you’ll pick up your receivers and read the defense. Don’t slow down.

Attack the line of line of scrimmage (D)
Use a STEEP angle of attack, as shown on the diagram. This forces the defense to commit NOW!

Decide (E-F)
Make your decision to throw or run QUICKLY. Don’t hesitate. It’s more important to make the decision to run or pass quickly than to always make the right decision. If you throw the ball on the receiver’s break, you have a good chance to complete it even if he is covered. If you decide to run, the sooner you decide, the more yardage you will pick up, even if it turns out you should have thrown it. The more practice and experience you get, the better your decision making will be. For starters, just decide FAST.

If you run, tuck it, protect the football, and go. You are now a running back. Use the field in front of you to your advantage.

* Cock your shoulders perpendicular to the receiver by twisting your upper torso quickly, bringing the ball to your ear. Keep sprinting!
* In a continuous motion, snap the shoulders 180 degrees while releasing the ball with the proper throw (refer to the throw).
* Although your legs are moving, from the waist up the throw should look no different than any other throw. You must practice this until your upper body is almost separate from the lower body.
* Throw it hard. Get it there fast. It’s your job to get it there, it’s the receiver’s job to catch it.

At first, repeat the drill 10 times, then switch sides. If possible, have someone time you from the snap of the ball to the cone; try to decrease the time. When you become proficient at the sprint out, add a receiver. It is incredibly valuable for a quarterback to drill with at least one of his receivers. That can really make or break a season. However, if no one is available, set up targets to throw at. Use your imagination.

If you have a receiver to work with, run different routes – short outs, curls, medium outs, deep outs, flags … whatever you will run off this during the season. Mix it up. Have fun. Try to get multiple receivers to drill with you. Have someone play defense; if he commits to you, throw, if he covers the receiver, run. Make a game out of it. But always, ALWAYS, follow the steps precisely.

*The reason you don’t see it much in major college football anymore is because they are usually grooming pro football players (though with the spread offense and the popularity of the 'dual threat' QB, this is balancing out). Also, many of the top college coaches now have either worked in the NFL, or want to, so they run what they know, or what they think will look good for their careers. Off the top of my head, I can only think of Arizona State and Air Force that run the sprint out as a regular part of their offense.

**In college football, the hash marks are between the pro and high school hash marks.

Posted by Mark at SpreadOffense.com at 4:46 PM No comments: