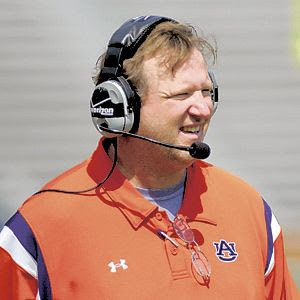 Tommy Tuberville, the head coach at Auburn said he remained committed to the spread offense, but a change in play calling and style was required and he was going with his 'gut felling' on the decision.

"It hurts. It hurts bad," Tuberville said on Wednesday. "It's a difficult situation. It's a difficult thing to do in the middle of the season. My responsibility is to this football team and it always will be. Tony's a good person. When it all comes down to it, it's about production. I didn't think over the last few weeks we were making any progress."

Tuberville hired Franklin from Troy last December after firing Al Borges. Franklin led the offense in the Chick-fil-A Bowl — a victory over Clemson that created a lot of excitement over the new offense at Auburn.

Auburn plays Arkansas this Saturday in an SEC battle.
Posted by Mark at SpreadOffense.com at 8:23 AM

It's a shame the Tuberville (whom I respect) fired his coordinator before allowing him to run "his offense". Auburn wasn't running the Tony Franklin system and the Auburn staff appears not have bought in either because Tommy didn't really want to go with "the system" or Franklin couldn't sell it to a group of assistants that hadn't worked with him before...hope everything works for out for all sides.

I wonder how many guys the new head coach will keep on staff. If they didn't like Franklin's offense, there is no way they will buy in to what Malzahn runs.