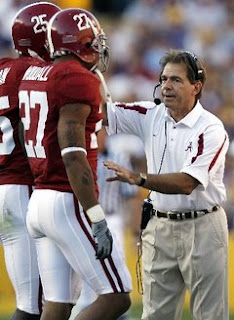 Last year, we posted what Coach Saban said at the 2009 SEC media day, so I thought it would be nice to post what he had to say this year about the spread offense. With the popularity of the spread (especially in the SEC), it seems to be a consistently popular question for the head coach of the defending national champions and 2009 SEC champ.

Question: As many football college teams are using the spread offense. Do you see many teams in college football perhaps taking advantage of what you do and mimicking some of what you do? Could that be a trend in college football, to go back to more of a pro-style set? What advantage does that give you on the recruiting trail when you're recruiting offensive athletes who can play in a set like they would eventually play in the NFL?
COACH SABAN: You know, I think one of the things we always tell players when we're recruiting them is, you know, when you go to college, you're in the business of developing two careers. You want to develop a career off the field by graduating from school, and that's the most important career that you have to develop when you go to college. But you also want to have a great college experience as a football player, win a championship, be as good as you can be, and see if you can develop a career as a football player and play at the next level.

But I do think it's more difficult for the people in the NFL, which is really not our issue as college coaches, to sometimes evaluate players, a left tackle that never gets in a three-point stance, a quarterback who never takes a snap from under center, a runner that never gets the ball with his shoulders pointed down parallel to the line of scrimmage. Some of those things are evaluation issues, which it's the player's choice when he chooses that, where he wants to go to college, the style of offense or defense he wants to play.
This is interesting - see Dan Mullen's reply to Nick Saban's comments on the spread offense, go to: http://www.jacksonsun.com/article/20100722/SPORTS/7220304
Keep spreading e'm!
--Mark
www.SpreadOffense.com
Posted by Mark at SpreadOffense.com at 8:49 PM