Looking Back At The Decade Of The Spread Offense - Coaches 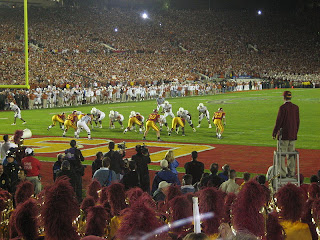 It would be hard to argue that the spread offense hasn't been one of, if not the most influential aspect of American football over the last decade (2000-2009). From the beginning of the decade to the present, the concept and execution of spreading the football field in order to create mismatches in both the passing and running games has changed the game forever on both the offensive and defensive sides of the ball.


Lets take a look at the decade and some of the major coaching influences on the spread offense.

In 2001, Rich Rodriguez was named head football coach of his Alma Mater, West Virginia University. In Rodriguez's first season, the Mountaineers went 3-8. The 2002 team registered the greatest turn around in Big East football history with a 9-4 record, with back-to-back road wins against ranked Virginia Tech and Pitt, and a Continental Tire Bowl berth. The Mountaineers finished second in the nation in rushing with 283 yards per game out of the spread offense that Rodriguez created at Glenville State College, and refined at Tulane and Clemson as offensive coordinator under Tommy Bowden.

It could be argued that Rodriguez invented the 'zone read' concept out of the spread offense, which places a dual threat quarterback into a read situation out of the shot gun, with a split second decision required on whether he keeps the ball or hands it off at the mesh point with the tailback running a zone play, depending on what the backside defensive end on the line of scrimmage does on the play. This play alone has spread in popularity amongst hundreds (if not thousands) of college, high school, and junior football teams throughout the United States over the decade.

The triple option has since been added to the zone read, see Coach Rod explain it here back in 2007.

In his first year at Utah, Meyer was named the Mountain West Conference football Coach of the Year, posting a 10–2 record. He also earned honors as The Sporting News National Coach of the Year, the first University of Utah coach to do so. Meyer's success can be attributed to his spread offense system. At Utah, Meyer's base offense displayed three, four, or five wide receivers and showcased the quarterback in the shotgun formation. With the Utes, he introduced the concept of motion into the backfield from perimeter skill players and turned it into an spread option attack, adding elements of the traditional run oriented option offense.

In 2004, Meyer led the undefeated Utes to a Bowl Championship Series bid, something that had not been done by a team from a non-automatically qualifying BCS conference since the BCS' creation in 1998. He remained at Utah long enough to coach the team to a Fiesta Bowl win over Pittsburgh, capping off the Utes' first undefeated season (12–0) since 1930.

In 2005, Meyer was hired as the head football coach of the University of Florida. Immediately, people in the media and some football coaches claimed that the style of spread offense Meyer ran at Utah could never make it in the tough SEC, known for its great defensive speed.

Urban Meyer has compiled a record of 56-10 since 2005 at Florida, winning two national championships and two SEC championships in that period. The Sporting News has just awarded him college football coach of the decade.

Joe Tiller was the head football coach at Purdue University from 1997 to 2008. During his tenure with Purdue, Tiller led the Boilermakers to ten bowl games in twelve years. Prior to Tiller's arrival in 1997, the Boilermakers had played in only five bowl games.

He was the first to use the spread offense in the Big Ten, a more pass oriented spread then run. Under Tiller and his spread offense, Purdue annually had one of the best offenses in the Big 10.

Under Mike Leach, Texas Tech has been known for its high-scoring, pass oriented spread offense. In a 2004 game vs TCU, the Red Raiders fell behind 21-0 late in the 2nd quarter, later to put on an offensive show and eventually win the game 70–35.

Texas Tech ended the 2008 regular season with 11 wins and 1 loss, the best in school history. The season also marked the first win over a #1 ranked team (Texas). The Red Raiders, along with Oklahoma and Texas, shared the Big 12 South division title. On December 2, 2008, the Associated Press named Mike Leach the Big 12 Coach of the Year.

Mike Leach is a disciple of Hal Mumme, known for developing the Air Raid offense.

Mike Martz became the head coach of the Saint Louis Rams on February 2, 2000 after Dick Vermeil retired immediately after winning Super Bowl XXXIV. He led the Rams to a 10–6 regular season record in 2000, but they lost in the 1st round to the New Orleans Saints 31–28.

The 'Greatest Show On Turf' went on to post a 14-2 record in 2001, before losing in Super Bowl XXXVI to the New England Patriots on a last second field goal.

Martz's spread offense relied on getting all five receivers into pass patterns that stretched the field vertically and horizontally, setting up defensive backs with route technique, and the quarterback throwing to a spot where the receiver could make the catch and turn up field for large 'run after catches' or RAC.

Pass protection was critical, because at least two of the five receivers would run a deep in, skinny post, comeback, speed out, or shallow cross pattern. Mike Martz credits the offensive system as being influenced by Sid Gillman and refined by former NFL coach Don Coryell of the San Diego Chargers.

Chip Kelly's potent spread option offense attack was an instant success at the University of Oregon. In 2007, his first season with the Ducks as Offensive Coordinator, they led the Pac-10 in scoring (38.2 ppg) and total offense (468 ypg), and also amassed the most yards in the history of Oregon football.

In March 2009, Chip Kelly was named head coach of Oregon, his first head coaching job at the collegiate level. Kelly became the first Pac-10 football coach to win an outright conference championship in his first season, sending the University of Oregon to the Rose Bowl for the first time since 1995.

On December 7th, 2009 Coach Kelly was named Pac-10 Coach Of The Year. He is the second Ducks coach to earn the honor, the other one being Rich Brooks , who won the award twice.

Chip Kelly's spread offense is a favorite here at SpreadOffense.com, check out some of the video clips of the Ducks at Spread Offense TV

Gus Malzahn is known as one of the innovators of the wildcat offense, and has been described as one of the games most innovative offensive minds, not just in the college ranks, but in all of football.

Malzahn joined Houston Nutt's University of Arkansas staff after the 2005 season, as offensive coordinator and wide receivers coach. Malzahn was part of the Razorbacks 2006 successful season in which they won the SEC Western Division championship, and installed the 'WildCat/WildHog' formation with the help of quarterbacks coach, David Lee.

In January, 2007, Malzahn received an offer from the University of Tulsa to be co-offensive coordinator (with Herb Hand, formally of West Virginia the other coordinator) and Assistant Head Coach. During the 2007 at Tulsa, Malzahn emerged as one of the premier offensive minds in college football, as Tulsa ranked first in the nation in total yards per game, ahead of Texas Tech and Hawaii, and with a more balanced spread offense attack.

Gus Malzahn's spread offense is also a favorite here at SpreadOffense.com, check out some of the video clips of Malzahn's offenses in action at Spread Offense TV

Josh McDaniels will go down in spread offense lore as the offensive coordinator who lead the New England Patriots 2007 offensive squad to 67 touchdowns (50 passing and 17 rushing) and 589 total points.

The New England Patriots in 2007 became the first NFL team to pass more than half the time from the shotgun spread offense formation. That offense was perhaps the most dynamic single season group in NFL history.

David Lee was named “Innovator of the Year” in 2008 by the Sporting News for introducing the “Wildcat offense” to the National Football League.

Bill Parcells, the VP of Football Operations for the Miami Dolphins hired Lee to be the Dolphins quarterback coach for the 2008 season, where he still holds that position.

In college, Lee worked with Gus Malzahn in 2006 at Arkansas where they installed the 'WildCat or WildHog' formation, showcasing Darren McFadden in the single wing formation.

This formation features Ronnie Brown, Ricky Williams, and Pat White as the 'wildcat' or single wing back accepting the snap.

Greg Davis is currently the offensive coordinator and quarterbacks coach for the University of Texas. In 2006, he was awarded the Broyles Award for the nation's top assistant coach for the 2005 season which included a national championship victory in the Rose Bowl over USC.

In that season, Vince Young established himself as one of the most dynamic dual threat quarterbacks in NCAA history, and Coach Davis implemented many zone read concepts into the Longhorn offense, using Young's dynamic running and passing ability out of the spread offense.

One of Davis's best known skill sets is his ability to coach the quarterback position. During his 11 years at Texas, Davis has developed Chris Simms, Major Applewhite, Vince Young, and Colt McCoy.

In the next two posts, we will look at some of the biggest players and individual plays in the last decade dominated by the spread offense.

Posted by Mark at SpreadOffense.com at 5:26 PM