If The Spread Offense Shot-Gun QB Is Obsolete... I Guess So Is Simple Math?? 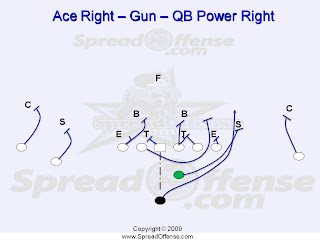 I haven't been able to find the actual coaches name at 'the' Ohio State University that supposedly called the 'shot-gun by the quarterback' in the spread offense obsolete (no longer in use; gone into disuse; disused or neglected - often by preference for something newer, which replaces the subject; Imperfectly developed; not very distinct).

That's a little scary if this is true, considering one of the most dangerous players at the quarterback position both running and throwing the football is Terrelle Pryor from Ohio State.

You gotta love Coach Rod's replies to the questions asked about this, and the spread offense overall:

“I could care less what he says,” Rodriguez said. “Everybody’s opinion is an opinion. We study everything, and our ultimate goal is to win. We sit down as a staff, and coaches and say what can we do that gives us the best chance to score points and win ballgames. For us it goes back to running the system we know.”

And to get to my point in the subject line, I just wrote an article on the famous 'Power' play run in football.

It's not an encyclopedia of information, but if you know football, you'll get the point ... that being in the single wing spread offense (with a dual threat QB) offers a clear advantage, obvious to even the beginner of American Football.

Keep spreading u'm Coach Rod (aka: The Chairman Of The Board of The Spread Offense) and all you other spread n shred'ers out there....