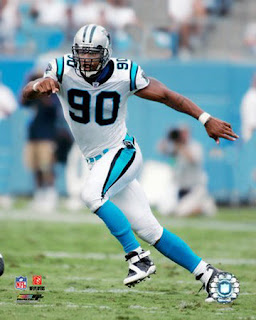 Let me lay out a scenario that we may see this upcoming NFL football season, and you tell me what the Referee will do, who's responsibility it is to 'protect the quarterback' in the NFL from unnecessary hits.

It's November 19th and the Miami Dolphins are playing the Carolina Panthers on the NFL Network.

Pat White is in at QB for Miami, with Ronnie Brown and Ricky Williams joining him in the classic 2 back (3, including White) shot gun spread option set.

The ball is snapped, and White, Williams, and Brown begin running a classic triple option play out of the shot gun. White 'zone reads' the initial inside zone hand-off to Williams, decides to pull the ball as the backside defensive end (Julius Peppers -- yikes!) executes a perfect 'square shoulder' anchor technique in the murky B-C gap area on the LOS.

White... who can run this play in his sleep with all the reps he's had over the past 5 years now attacks the perimeter as his instincts tell him with Ronnie Brown in a perfect pitch relationship, 4x4 (four yards deeper than the quarterback and four yards in front of him).

Peppers, who's instincts like White's are well situated in his DNA to attack QB's decides to coil and fire like a Cobra snake in a static stance at White... landing his face mask into White's chest/lower face mask area.

White gets the pitch off perfectly to Brown who gets the edge and registers a nice 10 yard gain.

The referee, who's one of many jobs in the NFL is to call all roughing penalties vs. the quarterback watches as Peppers and White roll off of each other...

Does the referee ever call a flag on this hit? Is there factors in the hit that would make the referee call or not call this 'roughing the quarterback'??

Would love to hear comments on this... knowing how the NFL is proactive in protecting their quarterbacks.

Email ThisBlogThis!Share to TwitterShare to FacebookShare to Pinterest
Labels: NFL