NFL Defenses Are Too Fast For The Spread Offense Run Game 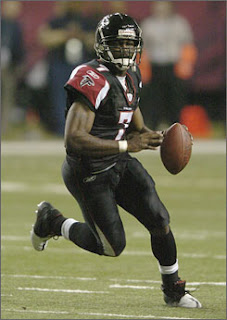 "NFL Defenses Are Too Fast For The Spread Offense Run Game" - If I have to read that one more time I may have to call Dell for a new computer screen, because this one may take 'the leap'.

Imagine Emmitt Smith, Barry Sanders, Adrian Peterson, LaDainian Tomlinson, etc... all conceding to the fact that NFL defenses where just 'too fast' for me to be a productive running back in the NFL? No matter what offense you'd run out of... West Coast, Pro-I, Two Tight End - One back, etc...

Please, enough about the NFL defenses being too fast... all your doing in the shot spread option offense is adding an athletic dual-threat quarterback to the equation, not re-inventing football!

In 2006, Atlanta's Michael Vick became the first NFL quarterback to rush for 1,000 yards in a season. Where defenses 'not too quick' that year? No, Michael Vick was just quicker, and more agile, and more athletic... just like L.T. is at the TB position, Randy Moss is at the WR position, or any other superior offensive player.

It kind of reminds me of the bully who you've never actually seen fight, but has the reputation of being the toughest guy out there... I think we may see pretty soon the NFL defenses reputation of "too fast for the spread run game, dual threat quarterback gimmick" be put to the test.

http://www.spreadoffense.tv/ (video sharing library)
Posted by Mark at SpreadOffense.com at 11:39 AM