So Your Spread Offense Quarterback Is Out... What Now? 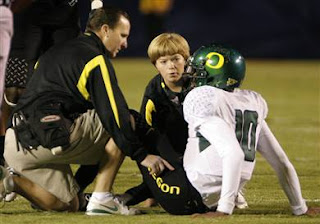 It's every coaches nightmare, but even more so in a shot gun spread option offense with a very athletic dual-threat quarterback. It's the second play of the game, and your stud QB sprains an ankle, or even worse.... does something bone-headed like sticks a freshmen in a locker on the Wednesday before the big game and is suspended.

You call on your second string guy and he's inexperienced, lacks the proper rep's, and is not as physically gifted.

Here's 3 things we recommend you prepare for, just in case the above happens to you.

A good way to keep your offense in 'spread mode' is to have a WildCat set ready with a good headed RB on your team taking the QB position. Obviously the throwing game will not be a big threat, but if you install the traditional WildCat sweep, power, and counter package with a RB at the single wing in the preseason and drill it during the season, it'll be an option for you until things stabilize. Herb Hand, OC at University of Tulsa actually mentioned they have this ready 'just in case'.

Sounds simple enough, but with limited practice time and new installs during the season, many #2 QB's lack the appropriate rep's. We recommend one practice a week for at least 12 plays with the first team, you yank the #1 QB out and pretend he's not available.... make it a heated session too, put some pressure on the offense and lay out some game situations that will make the whole unit think and support the new QB. I suggest doing this with your #1 center too....

3) Learn How To 'Quick Kick' Out Of The Shot-Gun

Sometimes the first few series with the #2 QB can be disastrous, the defense is feeding off the momentum of you losing one of your best players, and before you know it, you're in a 3rd and 27 at your own 20 yard line. I feel that putting in a 'quick kick' punt package out of the shot-gun with your 1st and 2nd string QB's is a nice way to regain some field position and put the game into your defenses hands until your offense settles down with the new QB. This needs to be practiced though against live reps in practice.... the last thing you want is a quick kick blocked, I've seen it happen. But executed correctly, I've seen field positions change 40 + yards as the defense has no one to field the punt.

Remember, having your personnel ready is the coaching staff's job, don't leave any rock unturned in your preparation.

--Mark
Posted by Mark at SpreadOffense.com at 8:11 PM