The College Spread Offense In The NFL By 2011 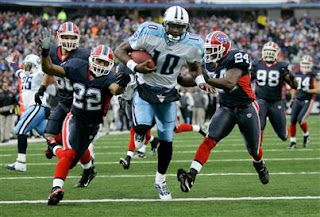 Now that the off season is here, I thought it would be a good time to look into my crystal ball and tell you what I see for the future of the spread offense. I think most would agree that the high school and college game has reached the momentum phase in regards to the implementation of this offense. A strong commitment is being seen at all three levels of college to recruit high school athletes to fit this system.

What about the NFL? How is this momentum phase in major college football going to effect National Football League teams in the future and how they'll draft offensive players out of college?

If you're reading this article, you likely already know the main difference between 'the spread offense' we're talking about today and 'the spread offense' of years past is the ability of the quarterback to run as effectively as a running back with the ball, and still be able to throw the ball with accuracy and effectiveness when needed.

If you think of the spread offense's run by the likes of Warren Moon with the Houston Oilers in the late 80's and early 90's, it was based off a quarterback who threw the football with great accuracy and frequency, and only ran with the ball when flushed out of the pocket.

The spread offense you see in college and high school today actually has designed plays for the QB to run, sometimes up to 5 or more designed runs or 'options' to run in the playbook based on how the defense reacts.

Spread offense's of the past had maybe one designed QB run, a QB draw that was only run near the goal-line.

One of the arguments I always hear is "The current spread offense could never be run in the NFL, the QB's would get killed because the defenses are so good." My rebuttal to that is:

If the defenses are so much better, then aren't the offensive linemen, running-backs, and receivers blocking for the running QB's that much better too? They came from the same talent pool of elite college players as the defensive player's, right?

In addition, wouldn't you agree that a Vince Young type of dual threat NFL QB is much less likely to get creamed by a defense when he runs with the ball then say a Warren Moon of that era? Vince Young is a runner who can throw the ball well enough to win, Warren Moon was a great passer who couldn't be expected to run the ball 10-12 times a game on designed QB runs because he just wasn't that type of athlete.

My impression was always that a quarterback was much more defense-less in the pocket getting sacked then running in the open field on a designed run.

So my point is this, with the likes of dual-threat college quarterbacks Dennis Dixon, Patrick White, Tim Tebow (2007 heisman trophy winner, a dual threat QB), Armanti Edwards, Terrelle Pryor (the most highly recruited high school senior this year), and others making such a splash throughout the college game, and high schools throughout the nation implementing run oriented spread offenses, isn't it just a matter of time before it makes its way into the pro game?

A lot will argue that the spread offense you see in college and high school today is nothing more than a dressed up version of the old Oklahoma Sooner wishbone offense of the 70's and 80's.

This offense never made it into the pros as many predicted, but I personally see a lot differences.

First off, the wishbone offense didn't spread the entire width of the field with big, strong, fast, and athletic wide receivers like the current spread offense, and secondly, the modern day spread is run predominately out of the shot-gun, which allows these talented dual threat QB's more options in the passing game that the wishbone formation did not.

Finally, back to my prediction for the future of the spread offense in the NFL.

By the year 2011, an NFL franchise will make a commitment to the current spread offense we see today in college and high school game by first hiring one of the many college coaches who have evolved this offense.

Names I think of are Rich Rodriguez at Michigan, Urban Meyer at Florida, Ron Zook at Illinois, or Chip Kelly at Oregon.

What these coaches will do is have three (3) dual threat quarterbacks on the 53 man active roster every week. These QB's may even rotate into the game and all three may see some sort of action every week, as these offenses work best in a no huddle system.

What NFL owners would be bold enough to try this first? Maybe a Daniel Snyder of the Washington Redskins, a Jerry Jones in Dallas, or an Al Davis in Oakland.

Imagine an NFL team having quarterbacks Vince Young, Patrick White, and Terrelle Pryor on the same roster in 3 years, sign me up... I'll pay extra for that!

I don't know about you, but I look forward to this day. I personally enjoy watching football much more on Saturday's as opposed to Sunday's, but that will all change as the stars of Saturday create a 'disruptive innovation' at the NFL level by 2011.


-- Mark Colyer - http://www.spreadoffense.com/
Posted by Mark at SpreadOffense.com at 7:36 PM

I guess one of the reasons why a run oriented QB never did well at QB in the NFL is the offense was not designed to fit his talents. I will say that if the Spread is to work in the NFL like you are talking about, it may have to be someone with the size of Vince Young or Tim Tebow. The NFL defenses are bigger and faster, and a smaller QB will take shots even in space. The NFL dual threat QB will have to be big enough to be durable. It will be interesting to see which NFL team will take the plunge into a Spread offense. Maybe Tennessee since they already have the QB.

The Spread offense in the NFL as a full time base offense is a joke and will never happen. Every offense in the NFL is designed to avoid the QB getting killed and now youre advocating a QB running with the ball? If it was decided that QB's should run with the ball wouldnt they be running backs? Wouldnt the single wing and option be run? Rarely can QB's transition from college to the NFL from a spread to a pro set offense now; Chad Pennington and Drew Brees not withstanding. For every one that does there are a dozen who fail to transition like Vince Young and Major Applewhite and Kliff Kingsbury etc. The ones that can transition are able to do so because they are drop backs QBs who understand how to read defenses and get through progressions, things the spread offense does not teach. It dumbs down the game. Any team that ran the spread I would zone blitz and overload one side of the opposing line out of that blitz and challenge the OL of the opposition to get over there and block me. I would blitz them til their QB could stand and see how much they want to run that nonsense next time. Dick Lebeau would rip a new ***hole through that. So would Bellichick, , etc.

The spread offense has slowly begun to creep into the NFL already this season. Typical run oriented and defensive minded teams already are drafting players to fit the new system and have shown flashes of this new offense already. Just look at teams like Pittsburgh, Philadelphia and the Giants. These are the typical east coast teams that have always been run oriented because it worked best during the cold conditions in the winter months. Ben Roethlisberger threw for over 500 yards last week in December. 500! It's certainly an exciting offense, but I'm still not sold that it will work for every team. I actually just wrote an article on this if you want to check out my blog.
http://theviewfromthestudentsection.blogspot.com/

The reason the spread will never become a full-time NFL offense is that QB's are way way too expensive to expose to the big hits they would undoubtedly take if they were expected to run the ball 10-12 times per game. The NFL QB will always be passer first, runner second, and when NFL offenses do want to get cute, they'll put in a Ronnie Brown or Josh Cribbs in the QB slot and run the "Wildcat". As for the Vince Young argument, he had alot of success last season because he learned how to be a passer. Other "spread" QB's like Alex Smith will simply not be full-time NFL starting QB's until they learn to become passers first. No owner wants his 100 million dollar man getting whacked by Ray Lewis or Troy Polumalu 10-12 times a game.