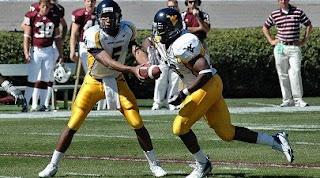 The zone read is considered by most shot-run spread offense coaches as the 'bread and butter' run play of this offensive system. It's comparable to the buck sweep in the 'Wing-T' or the ISO in the 'I formation'.

Lets breakdown two important areas of the zone read that make it so effective:

1. A key component of the shot-gun spread offense is the ability of the quarterback to 'cancel out' the backside Defensive End (DE) at the mesh point with the Running Back.

What we are saying here is that at the critical point where the quarterback has to decide whether to keep the ball or hand it off (the mesh point), the defensive end (or possibly an outside linebacker) responsible for backside contain has to make one of two decisions.

Decision #1 is to crash or knife down the line of scrimmage for the running back, Decision #2 is to 'stay home' and box out the quarterback for a potential keep.

2. One thing the zone read allows is the offense to dictate 'numbers' and 'angles' during the pre-snap period. This is why 90% of spread offense teams go with a no huddle, it makes the defense show their hand in regards to alignment, allowing the offense to change the play based on 'lucky or ringo', 'rip or liz'...coaches and player lingo for go 'right or left' with the play.

If the defensive alignment shows more defender to the left (using the centers crotch as the mid-line) in the box, then the call at the line would be 'ringo', meaning we're zoning right, thus the QB will be reading the left defensive end on the zone read.

This number is usually a 4 vs. 3 defenders scenario that determines the call. If the numbers are even (say 4 left and 4 right), a lot of coaches teach their quarterback to read the defensive front alignment, looking to run to the '1 technique' tackle side as opposed to the '3 technique' tackle side, looking for better zone blocking angles.

If you don't want to take that path with your quarterback, you can also pick the side in an even defensive alignment scenario based on your team's preference, wide side of the field, or player strength (or a defenders weak side), or audible to the bubble screen if appropriate.

Mastering these two areas of the shot-gun zone read can really go a long way in producing some serious offensive production.

See video below of some exciting shot-gun, spread offense zone read plays (of course 'speed and agility' from your player's help make it all look great).

Posted by Mark at SpreadOffense.com at 12:20 PM